Budapest, city, capital of Hungary, and seat of Pest megye (county). The city is the political, administrative, industrial, and commercial centre of Hungary. The site has been continuously settled since prehistoric times and is now the home of about one-fifth of the country’s population.

Character of the city

Once called the “Queen of the Danube,” Budapest has long been the focal point of the nation and a lively cultural centre. The city straddles the Danube (Hungarian: Duna) River in the magnificent natural setting where the hills of western Hungary meet the plains stretching to the east and south. It consists of two parts, Buda and Pest, which are situated on opposite sides of the river and connected by a series of bridges.

The climate of Budapest is transitional between the extreme conditions of the Great Alfold and the more temperate climate of Transdanubia, with its abundant rainfall. Mean annual temperature is in the low 50s F (about 11 °C), ranging from a July average in the low 70s F (about 22 °C) to the low 30s F (about −1 °C) in January. Mean annual precipitation is 24 inches (600 mm). Winter snowfalls can be heavy, and the temperature may fall below 5 °F (−15 °C), but, on the other hand, heat waves combined with humidity in the summer can make the air oppressive. Flooding in Pest was endemic before the river was regulated in the 19th century. The Danube (blue only in the Johann Strauss waltz) has become heavily contaminated, and air pollution, from which the inhabitants of Buda have largely been able to escape, has afflicted most districts in Pest. 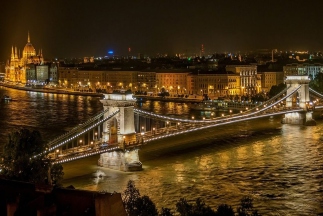 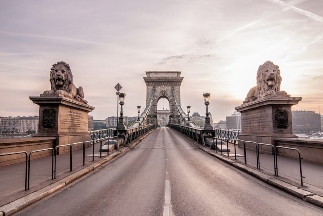 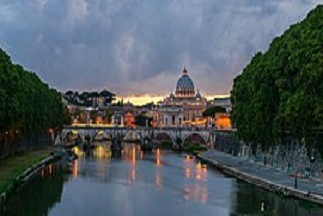